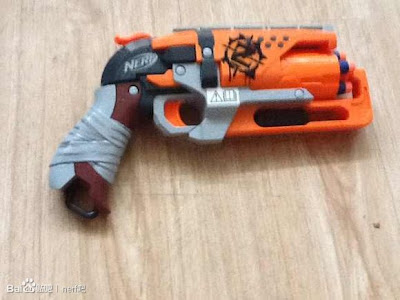 Or, next time we can just use Google okay?

So, the Zing Toys bow has grown in popularity. I know of a few nerfers who use them, and regularly in wars.

Has anybody figured out a good alternative to the horrid retail three pack of darts? Who even wants the suction heads, so without that its around $6 an arrow. Surely we can create a homemade arrow for far cheaper.

As anybody here started on this faithful quest? If so, the secrets of your fletcher's trade would bring toy to us all.

If not, spit balled ideas are a welcome sight.

The XD line is a sham, a marketing scheme to get people to buy two of the same blaster because it's a different color.

Most are the same, some are worse.

If you have a choice, get the Blue Retailator

Only interested in the 'Nerf On or Fuck Off', absolutely will not buy a NerfSTRONG.

The spiderman and venom wrist blasters would probably do the trick. I fired it a few times from my modified firestrike, which I've chrono'd at 100fps. At short ranges i could barely register the whistle, but at longer ranges it was a little more pronounced. Again, the whistle was much less pronounced than an actual whistler dart.

I think you should not be pursuing this idea. The whistle is not prominent enough to be of any actual use. Creating the hole degrades accuracy and consistency of said dart. Although muzzle velocity is unaffected, flight dynamics are drastically altered.

I cannot say enough good things about the Stryfe.

Get a Stryfe, remove it's dart sensor, and never look back.

I'm fairly sure a local hardware store should have cpvc.

Open Google and search 'hardware zipcode', obviously you put in your own zip code.

Call the stores and ask if they have cpvc. Willing to bet one has it.

If not, as mentioned McMaster will have some. Alternatively, haven members are always willing to sell you some; for a profit of course.


#333812 What would be a good replacement motor for Nerf Stampede

You can just put out a WTB for a stampede motor. As it happens, i have one and am extremely willing to let it go.

3.74 at meijer stores on clearance

Si, but these are the lesser black I-beam's.

Somehow, out of about 20 on the shelf, there were two of the full sized panthers.

MHA is by far the best foam. You should buy some of their dart kits, especially since their darts are the safest alternatives out there.

Uh, snicker stefans are amazingly safe. They are also incredibly cheap to make.

Made a few, and they were war tested.

Are you going to be taking attendance, do we need to print out a copy of the syllabus, and when is the first exam?

Looking forward to the Flywheel lecture.

Put me as a maybe, we'll see how my course work is that week.

If I do show, I'll bring a core so we can do some DTC.

I would put it in Off Topic. This seems the best place for it.
Even if, by definition, off topic is for anything unrelated to wargames.

My second option is the wars thread. Because, you know, its from a war.

That doesn't tell you much, and it doesnt seem that his 'mod' does anything. I've heard rumors that gluing plastic washers to the underside of disc's give them more weight and thus more stability.

Duct tape will only peel off until the smooth outer skin is worn away. Then only the adhesive will be left on the flywheels, and it will not peel off easily. You will have to use Goo Gone or a similar product to remove it. Putting duct tape on flywheels is analogous to putting electrical tape over a plunger seal: it will provide better results until the tape degrades. Then you will have a sticky mess on your hands.

Perhaps you misunderstand the power of duct tape.

The outer layer will not wear away. How do i know this? The ominous 'blue buildup' still occurs from darts, although slower.

The tape will not wear away.

I personally wrap my flywheels in duct tape.

Wrap a single layer around the wheels, and cut it with a razor so the two ends match perfectly. Drip a dot of superglue on the seam and let gravity pull it down. This holds the tape supastrong.

I've never had my wheels come unwrapped, and the foam buildup occurs much slower.

Duct tape will leave a terrible sticky residue as it wears away.

False. Duct tape will peel cleanly off flywheels, and it also doesn't 'wear away'; it is a permanent flywheel wrap. That's the whole reason i use duct tape and not plastidip.

Isn't duct tape a bit slippery for use as added traction? The stuff I have doesn't seem like it would provide any benefit traction-wise.

Comparatively, the duct tape wheels give a slight traction boost. However, were not just increasing the gripping surface of the wheels; we are also decreasing the gap between the wheels. This provides much more 'traction' than stock wheels simply because the dart must pass through a smaller area.

I think generally the community only uses vinyl dye to prime a blaster, at least I do.

I tried using some white vinyl dye as actual paint once, while I did not experience the faults you are I can confirm that vinyl dye makes horrible paint.

Just stick to cheap spray paint, and use black dye for the primer/basecoat.

I personally use unprotected cells.

I'm sure one of the electrical engineers lurking around here will tell you the exact difference, but all I know is unprotected = performance and protected = bad mojo.

Buy some unprotected cells and all your troubles will be gone.

You've got the tray soldered in backwards. Switch the wires and you're golden.

My pink tubing also failed on me as well, so I just replaced it with some vinyl tubing and now it works fine.
My pump also started to warp and eventually snapped so I'm working on reinforcing the tank, and replacing the old pump with a bike pump. But for now since your pump hasn't snapped yet, I would reccommend reinforcing it with devcon plastic welder or some other kind of epoxy/e-putty combo.

I guess you missed the part where I said I sheathed it in brass. I'd take metal reinforcement over epoxy any day.

I'm deeply sorry to tell you this, but dude, neither of those are oprv's....

This. I thought the exact same thing. After plugging the pump oprv and doing a rebarreling, I was dismayed to find performance was dismal.

So I went back into the blaster and performed both actions McGee suggested, and performance did indeed rise. These might not be oprv's, but they must have been leaking somehow.

Thanks for the info McGee. Oh, and two common failure points I guess I should tell you guys, the pump shaft and pink vinyl tubing. The pump shAft warped and bowed on me, making it impossible to pump. I sheathed it in some brass tubing, and now it's golden (in two ways). The pink vinyl burst on me fairly soon, so I simply replaced it with some spare fish tank tubing I had lying around. It's much thicker and I've used it to do pump relocations before. It's best to do these actions right off the bat, that way you don't have to reopen the blaster a few times.

Ben meaning to make an afterburner system for awhile, me thinks you have inspired me to quit being so damned lazy.

Nice work, my only complaint is you didn't switch the Rayven trigger mech to run with an extension spring. 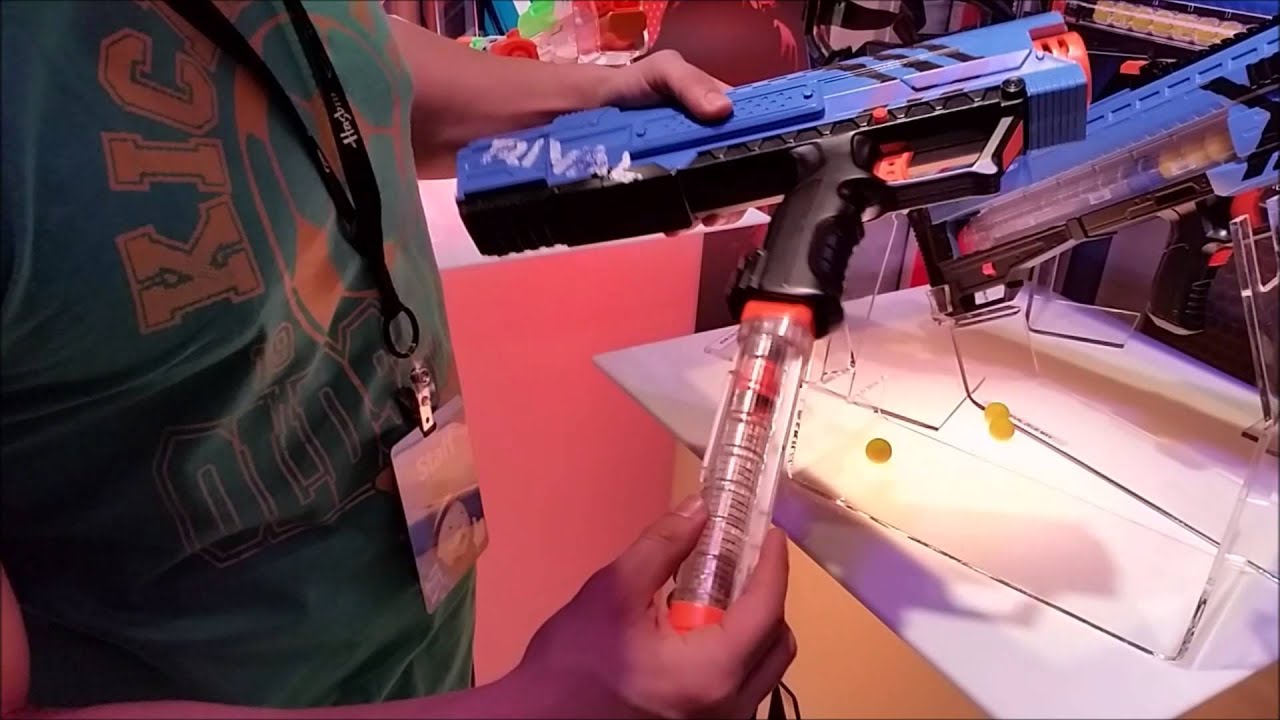 I think it's hilarious Hasbro is trying to market to the NiC, especially with a flywheel golfballshooter flagship.

The 'new ballistic ball' is reportedly .9" diameter and divoted like a golf ball.

Any news about change of site or anything relevant chop?

Confirmed + 1. What time are you thinking it will wrap up? Also, are Z-tech bows allowed? If yes, I'm a plus 2.

-Incomplete. No rendition of final product. Wait until the whole this is done before posting.
-meme

I agree, this is lacking and incomplete. It is unknown what specific weapon this supposed to resemble from Fallout(which I'd like to know, as I don't see anything resembling the this integration), why it is modded when it is clearly stated that it is a soft prop and is explicitly mentioned that aesthetics topple performance, or if it fires farther/faster than a stock rapidstrike (in other words, matching/exceeding the capabilities of a stock rrapidstrike and thus making it worthwhile to mod.)

I mean, we don't have to be Elitist asshats.

OP, I'd love to see this finished in our picture thread.

Are you selling these yet?

At last notice he had some work to do. If you are careful, his current wye will work perfectly and last a long time.

If you are not careful, you will block the wye with your hopper tube and upon your first shot will shatter the wye.

If you really want one, pm kronos. My guess is he wont sell you one.

Link to atomic mods. Not sure if this is the motor oreo is talking about, but damn i guess this is the tops.

Maybe 3 trust fires is too much? Maybe it is intended to run at stock voltage or a little more?

The forward voltage rate is 9volts. MAV seems to be running them at recommended voltage, so i'm not sure whats happening for him.

I've burned two of these motors with 4s 14500 cells, but that was a controlled test to see what they could take and to know the warning signs. I normally run them on 3s 14500 cells, and have had no malfunctions. My blasters have not gone through a whole lot of use, so perhaps that's a factor. I'm looking for some higher quality Tamiya's to do some testing, but right now i have nothing definitive to say. If my motor's do shred, i'll be replacing them and running them on 2s 14500 cells to see how that works out.

I'm slowly losing faith in these motors as i continually hear horror stories of blasted and bombarded melted shreds coming from their use.

Mav13, it seems like more expensive higher quality motors are a better option.

It's rather easy to pop them. I think many people forget these are rated at 4.5V, less than stock motors. At that voltage, the RM2's outperform their predecessors by having tighter wound brushes. Cool, works great.

Overvolting to 14volts (4*fires) and beyond will butter them kernels. Might even salt them too.

Cambo, run them at 9volts.

I run mine at 11.2volts, and so far have had no issues with short term use.

Most users here on NH will tell you to use photobucket, but if you can't quite figure it out Imgur.com is a great hosting service.

Product
We will be offering the following:

Ordering: Send us an e-mail at tekreconcommand@gmail.com and let us know the following:

Payment: We will send you an invoice via paypal once we receive your e-mail order. Once you pay that invoice we will send you a confirmation e-mail to let you know that well be shipping your order once its ready!

Tek Recon is all up in this online mail order.

With low modding potential, noninterchangeable blaster clips, and heavy focus on 'irl vidja game' these blasters were clearly not meant for the nic.

I look forward to the future of Tek Recon, and expect good things from them. Dropping $75 on a Havok, xtra clip, and 75 nrg's seems like something i want to do; just not yet.